YOU'RE REGISTERED! CHECK YOUR EMAIL FOR DETAILS!
HEY! WANT ONE OF MY FAVE OFFERS EVER?
DISCOVER HOW TO ASK BIGGER
TO RECEIVE MORE... IN LIFE & BUSINESS
GET ALL MY BEST STRATEGIES, TIPS & EPIPHANIES ON ASKING BIGGER
FOR ONLY $22 AUD (USUALLY $37)
That's a BIG YES for me!
Details below!
OFFER ENDS IN 60 MINUTES 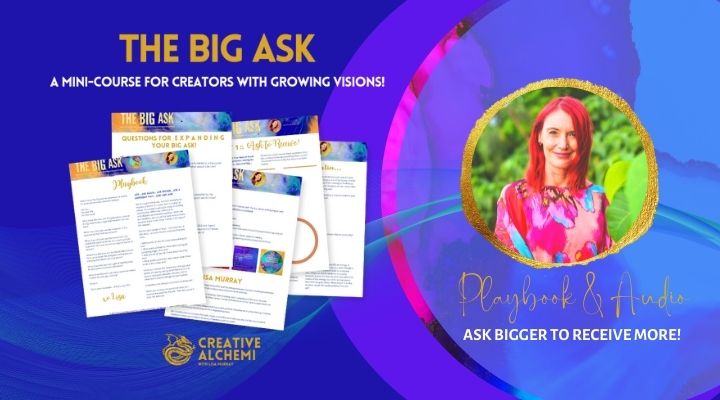 HEY! WANT ONE OF MY FAVE MINI-CLASSES EVER?
DISCOVER HOW TO ASK BIGGER
TO RECEIVE MORE... IN LIFE & BUSINESS
GET ALL MY BEST STRATEGIES, TIPS & EPIPHANIES
ON ASKING BIGGER
FOR ONLY $22 AUD (USUALLY $37)
That's a BIG YES for me!
Details below!
SPECIAL OFFER ENDS IN 60 MINS
Activate your magic!
The BIG ASK is a short and powerful mini-class in discovering how to ask for more in your life and business.
We're not always good at asking... sometimes we settle for way less than we can have. This class boosts your awareness on what to ask for, how to ask and how to receive more!
Here's what you'll receive...
After you pay you'll receive access to the course portal where you'll find the BIG ASK Playbook & Audios.
Normally $37 AUD... for the next 60 minutes it's only $22 AUD.
That's a BIG YES for me!
$22 AUD is approximately $22 CAD / $16 USD  /  15 EUR / 12 GBP
Meet Lisa Murray
An unconventional mix of the magical mystical and the entrepreneurial, Lisa has been creating businesses since she was 8.

Are you wondering who am I to tell you about BIG ASKS?
Well... settle in for a couple of highlights!
Back in my burnout days I wanted to be paid for all my favourite things... art, healing, writing and travelling. Like who wouldn't right?? After leaving the corporate jungle, I was determined it was playtime for me.
Within a year I was getting paid for healing; within two years, writing and travelling became paid too - and I was being given speaking spaces on other people's stages all over the world.
The art took a little longer - I had to find my style (given that I can't draw a thing!) And now it sells on the regular!
I've also offered live classes in asking bigger - one client was offered a scholarship to a prestigious university, against all odds. Another received not one but three film parts in Hollywood, after a dry spell. Another was offered a $75k contract to deliver her work to someone else's audience. Another received a job overnight, after months of looking.There's heaps of fun stories!!
READY TO DISCOVER THE JOY OF BIG ASKS?
YOU KNOW WHAT TO DO... BUY IT NOW!  $22 AUD is a steal...
That's a BIG YES for me!
PS. Here are some of the things people have asked for in my live Big Ask events - you get to define BIG!
To be paid to be a motivational speaker; a new photography studio; pursue creative activities with gusto; be fluent in a language; having a restaurant; visibility and courage to make my first videos; win a speaking award; discover my talents; rejecting sugar with ease; being paid to run events internationally; have a nurturing and playful intimate relationship; more kindness in the world; a decluttered office; eliminate my student loan; begin a start-up based on my research expertise; be a published author... and so many more.
Are you inspired yet? It's time to stop asking for small things so that everyone around us can stay comfortable...
I acknowledge the Traditional Owners of the Country on which I live today, the Gubbi Gubbi people, and recognise their continuing connection to land, waters and culture. I pay my respects to their Elders past, present and emerging.
Decline
Yes I Agree
We use cookies to give you the best possible experience on our website. By continuing to browse this site, you give consent for cookies to be used. For more details please read our Cookie Policy.
Yes I Agree
Decline